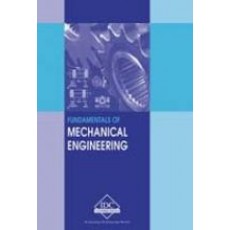 This introductory manual is designed for those with little or no prior formal background, who function as managers, supervisors, engineers, planners, inspectors, designers, researchers, investors or procurers, and who seek a basic understanding of the practical aspects of mechanical engineering.

Mechanical Engineering, as its name suggests, deals with the mechanics of operation of mechanical systems. This is the branch of engineering which includes design, analyze, testing, manufacturing and maintainenance of mechanical systems. The mechanical engineer may design a component, a machine, a system or a process. Mechanical engineers will analyze their design using the principles of motion, energy, and force to einsure the product functions safely, efficiently, reliably, and can be manufactured at a competitive cost.

Mechanical engineering plays a dominant role in enhancing safety, economic vitality, enjoyment and overall quality of life throughout the world. Mechanical engineers are concerned with the principles of force, energy and motion.

Mechanical engineering is a diverse subject that derives its breadth from the need to design and manufacture everything from small individual parts and devices (e.g., microscale sensors and inkjet printer nozzles) to large systems (e.g., spacecraft and machine tools). The role of a mechanical engineer is to take a product from an idea to the marketplace. In order to accomplish this, a broad range of skills are needed.

Since these skills are required for virtually everything that is made, mechanical engineering is perhaps the broadest and most diverse of engineering disciplines.

The main areas of study in this branch are:

A foundation concepts of physics, a force may be thought of as any influence which tends to change the motion of an object. A force can be described as the push or pull upon an object resulting from the object's interaction with another object. Whenever there is an interaction between two objects, there is a force upon each of the objects. When the interaction ceases, the two objects no longer experience the force. Forces only exist as a result of an interaction.

There are four fundamental forces in the universe,: the gravity force, the nuclear weak force, the electromagnetic force, and the nuclear strong force in ascending order of strength. In mechanics, forces are seen as the causes of linear motion, whereas the cause of rotational motion is called a torque. The action of forces in causing motion is described by Newton's Laws.

Force is a quantity which is measured using the standard metric unit called the Newton. A Newton is abbreviated by a "N". To say "10.0 N" means 10 Newton of force. One Newton is the amount of force required to give a 1 -kg mass an acceleration of 1 m/s2.

A torque is a special form of force that turns an axle in a given direction. It is sometimes called a rotational force. You can create a torque by pushing on a rod or lever that rotates an axle. Likewise, a torque on an axle can result in a linear force at a distance from the center of the axle.

Torque equals force multiplied by moment arm. Pushing on a rod that rotates an axle can create a torque on that axle. Likewise, a torque on an axle can result in a linear force at a radius from the center.

The relationship between torque and force is:

T is the torque in newton-meters

F is the force (Newtons)

R is also sometimes called the moment arm. The force, F, is applied perpendicular to the radius, lever or moment arm.

Work refers to an activity involving a force and movement in the direction of the force.

In order to accomplish work on an object there must be a force exerted on the object and it must move in the direction of the force.

Where force is measured in Newtons and distance in meters.

For a constant force F which moves an object in a straight line from x1 to x2, the work done by the force

Mathematically, work can be expressed by the following equation:.

For the more general case of a variable force F(x) which is a function of x, the work is still the area under the force curve, and the work expression becomes an integral.

Work is not done when there is no motion or when the force is perpendicular to the motion.

Let us apply the work equation to determine the amount of work done by the applied force in each of the three situations described below.

g represents the acceleration of gravity (9.8 m/s/s on Earth)

Kinetic Energy is depend on two variables: the mass and the speed

The following equation is used to represent the kinetic energy (KE) of an object:

Power is the rate at which work is done. It is the work/time ratio. Mathematically, it is computed using the following equation.

Table 1.1 gives the most common units of engineering quantities that you will come across.

Figure 1.1 shows a representation of the linkage of basic mechanical units.

Friction is a force that is created whenever two surfaces move or try to move across each other.  Friction always opposes the motion or attempted motion of one surface across another surface. Friction is dependant on the texture of both surfaces and the amount of contact force pushing the two surfaces together.

In a machine, friction reduces the ratio of output to input. An automobile, for instance, uses one-quarter of its energy on reducing friction. Yet it is also friction in the tires that allows the car to stay on the road, and friction in the clutch that makes it possible to drive at all. From matches to machines to molecular structures, friction is one of the most significant phenomena in the physical world.

There are advantages and disadvantages of friction. Since friction is a resistance force that slows down or prevents motion, it is necessary in many applications to prevent slipping or sliding. But it can also be a nuisance because it can hinder motion and cause the need for expending energy. A good compromise is necessary to get just enough friction.

The force of friction is a force that resists motion when two objects are in contact. If we look at the surfaces (Figure 1.2) of all objects, there are tiny bumps and ridges. Those microscopic peaks and valleys catch on one another when two objects are moving past each other.

There are two types of friction

If we try to slide two objects past each other, a small amount of force will result in no motion. The force of friction is greater than the applied force. This is static friction. (Figure 1.3) If we apply a little more force, the object ‘breaks free’ and slides, although we still need to apply force to keeps the object sliding. This is kinetic friction (Figure 1.4). We need not apply quite as much force to keep the object sliding as we originally needed to break free from static friction.

Figure 1.5 shows the relationship between applied force and frictional force.

Relationship between applied and frictional force

Let’s examine the relationship between these two forces and the applied force that creates them. Figure 1.5 shows static frictional force increasing to a maximum with the application of a force then dropping off sharply to a lesser value (kinetic friction) once the object starts moving. We can conclude few points from this graph such as those listed below.

This constant is known as coefficient of friction: μ (the Greek letter ‘mu’). Thus we can write the equation as:

Table 1.2 shows some common values of coefficients of kinetic and static friction.

Some common values of coefficients of kinetic and static friction

These values are approximate.

Mechanical Engineering deals with mechanics of operation ons different systems. The various functions that fall within the scope of this branch are designing, manufacturing and maintenance. For this purpose it uses laws of physics and applies them to analyze their performance.

Friction is a force which is created when two surfaces move across each other. It plays very important role in some situations like walking, writing, etc. where you could not do without the force of friction. In some cases friction is less required, so comproimise is required.