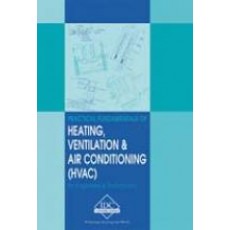 This manual is designed for engineers and technicians from a wide range of abilities and backgrounds and will provide an excellent introduction to the fundamentals of heating, ventilation and air-conditioning. It commences with a review of psychrometric charts and then examines the factors that influence design choices, indoor air quality, load calculations and heating/ventilation and air-conditioning systems. Numerous tips and tricks throughout the manual make it very practical and topical to your applications.

An Introduction to Practical Fundamentals of Heating, Ventilation & Airconditionning (HVAC)

After reading this chapter the student should be able to:

Apart from reasons for comfort alone, air conditioning is commonly used nowadays in various industries such as food, automobiles, hotels, textiles and many more. On Earth, not only pollution from smoke is on the rise but pollution from dust is also playing havoc with our lives. Air conditioning plays a vital role in keeping out smoke and dust which could harm our health. Similarly, air conditioning has an important role to play in the preservation of food.

At present, there is hardly any sector of the economy that is not dependent on this industry. In fact in most areas of industry, HVAC systems are considered to be a basic necessity.

It is thus important to become part of this industry and this course is targeted at providing you with the basic knowledge and technology to play a role in designing, installing and commissioning HVAC systems.

The following gives an overview of the basic principles of thermodynamics, which play a key role in understanding HVAC systems.

In simple language, force is defined as a push or a pull. It is anything that has a tendency to set a body into motion, to bring a body to rest or change the direction of any motion.

The Earth is surrounded by an envelope of air called the atmosphere, which extends upward from the surface of the earth. Air has mass and due to gravity exerts a force called weight. The force per unit area is called pressure. This pressure exerted on the Earth’s surface is known as atmospheric pressure.

Most pressure measuring instruments measure the difference between the pressure of a fluid and the atmospheric pressure. This is referred to as gauge pressure.

Absolute pressure is the sum of gauge pressure and atmospheric pressure.

In the above figure

Pa is the atmospheric pressure

Pgauge is the gauge pressure

Pab is the absolute pressure

Pvacuum is the vacuum pressure

It is defined as the mass of a substance divided by its volume or the mass per unit volume.

Specific Volume is defined as the reciprocal of density or volume per unit mass.

Specific Weight (Ws) is defined as the weight of a substance divided by its volume or the weight per unit volume.

A body is said to possess energy when it is capable of doing work. In more general terms, energy is the capacity of a body for producing an effect. Energy is classified as

The following are the various forms of energy.

H = height of the object above the datum

If a body weighing one kg is moving with a velocity of v m/sec with respect to the observer, then the kinetic energy stored in the body is given by:

This energy will remain stored in the body as long as it continues in motion at a constant velocity. When the velocity is zero, the kinetic energy is also zero.

Molecules possess mass. They possess motion of transactional and rotational nature in liquid and gaseous states. Owing to the mass and motion these molecules have a large amount of kinetic energy stored in them. Any change in the temperature results in the change in the molecular kinetic energy since molecular velocity is a function of temperature.

Also the molecules are attracted towards each other by forces, which are very large in their solid state and tend to vanish once they are in a perfect gas state. In the melting of a solid or vaporization of a liquid it is necessary to overcome these forces. The energy required to bring about this change is stored in molecules as potential energy.

Since all other forms of energy may be converted into heat, it is considered to be energy in its lowest form. The availability of heat energy to do work depends on temperature differential.

It may be defined as the energy that must be added or removed from one kilogram of a substance to change its temperature by one degree Centigrade. In refrigeration technology heat capacity is used to determine how much heat should be removed to refrigerate various products.

Note: CS is the heat capacity at constant pressure

m = mass of the substance in kg

Latent heat is the heat at which a substance changes its phase without any increase or decrease in the temperature. It is the amount of heat required to change the state of a substance.

Note: Cw is the heat capacity of moisture

m = mass of the substance in kg

Like other forms of energy heat can be measured because it has quantity and intensity. Heat is not visible but manifests itself in its effects on various substances either by changing its state or by creating relative degrees of sensation when in contact with the human body.

Since temperature is a measure of heat content, the temperature can be measured by measuring the effects of heat on different properties of matter as follows;

Boiling water does not necessarily have to be hot because if there is vacuum, water boils at a very low temperature. The same is true when it comes to other liquids, such as various refrigerants. These refrigerants have the same properties as water except their boiling point ranges are lower.

This pressure temperature relationship is used in most air conditioning and refrigeration systems.

It is a fundamental principle that matter can neither be created nor destroyed though it may be made to take different forms. Similarly, energy cannot be created or destroyed. It can be converted from one form to another. The first law of thermodynamics states that the total energy in a system always remains constant.

This law is mainly based on observation and can be best studied with the help of observations.

In the following examples, we can see that heat, work, electricity and chemical energy are various forms of energy and they are mutually convertible.

The first law of thermodynamics can be represented by the equation:

E1 is the energy possessed by the system initially

Qa is the energy added to the system

Qt is the energy taken away from the system.

The second law of thermodynamics can be stated in a number of ways as:

With a brief discussion on the various thermodynamic principles, let us now study the fundamentals of Heating, Ventilation and Air conditioning in the next chapters.

Heat is always transferred when a temperature difference exists between two bodies. There are three basic modes of heat transfer:

The fluid temperature (Tb), referred to as the bulk temperature, varies according to the details of the situation. For flow adjacent to a hot or cold surface, Tb is the temperature of the fluid that is "far" from the surface, for instance, the center of the flow channel. For boiling or condensation, Tb is equal to the saturation temperature.

Fluid flow is an important part of most industrial processes; especially those involving the transfer of heat. Frequently, when it is desired to remove heat from the point at which it is generated, some type of fluid is involved in the heat transfer process. Examples of this are the cooling water circulated through cooling coils in HVAC, the air flow past the heating and cooling coils, from fans and blowers, duct work, terminal units, packaged air conditioning units etc., Unlike solids, the particles of fluids move through piping and components at different velocities and are often subjected to different accelerations.

The basic principles of fluid flow include three concepts or principles:

A fluid is any substance which flows because its particles are not rigidly attached to one another. This includes liquids, gases and even some materials which are normally considered solids, such as glass. Fluids are materials which have no repeating crystalline structure.

There are several properties, including temperature, pressure, mass, specific volume, density, and Buoyancy.

Pascal's law, or the Principle of transmission of fluid-pressure, states that "pressure exerted anywhere in a confined incompressible fluid is transmitted equally in all directions throughout the fluid such that the pressure ratio (initial difference) remains the same."

ΔP is the hydrostatic pressure (given in pascals in the SI system), or the difference in pressure at two points within a fluid column, due to the weight of the fluid;

ρ is the fluid density (in kilograms per cubic meter in the SI system);

Δh is the height of fluid above the point of measurement, or the difference in elevation between the two points within the fluid column (in metres in SI).

The continuity equation is simply a mathematical expression of the principle of conservation of mass. For a control volume that has a single inlet and a single outlet, the principle of conservation of mass states that, for steady-state flow, the mass flow rate into the volume must equal the mass flow rate out. The continuity equation for this situation is expressed by the following equation:

Head loss is a measure of the reduction in the total head (sum of elevation head, velocity head and pressure head) of the fluid as it moves through a fluid system. Head loss is unavoidable in real fluids. It is present because of: the friction between the fluid and the walls of the pipe; the friction between adjacent fluid particles as they move relative to one another; and the turbulence caused whenever the flow is redirected or affected in any way by such components as piping entrances and exits, pumps, valves, flow reducers, and fittings.

The friction factor has been determined to depend on the Reynolds number for the flow and the degree of roughness of the pipe’s inner surface. The quantity used to measure the roughness of the pipe is called the relative roughness, which equals the average height of surface irregularities “Î”divided by the pipe diameter “D”

The value of the friction factor is usually obtained from the Moody Chart.

The frictional head loss can be calculated using a mathematical relationship that is known as   Darcy’s equation for head loss. The equation takes two distinct forms. The first form of Darcy’s equation determines the losses in the system associated with the length of the pipe.

The losses that occur in pipelines due to bends, elbows, joints, valves, etc. are sometimes called minor losses. This is a misnomer because in many cases these losses are more important than the losses due to pipe friction, considered in the preceding section. For all minor losses in turbulent flow, the head loss varies as the square of the velocity. Thus a convenient method of expressing the minor losses in flow is by means of a loss coefficient (k). Values of the loss coefficient (k) for typical situations and fittings is found in standard handbooks. The form of Darcy’s equation used to calculate minor losses of individual fluid system components is expressed by Equation:

Minor losses may be expressed in terms of the equivalent length (Leq) of pipe that would have the same head loss for the same discharge flow rate. This relationship can be found by setting the two forms of Darcy’s equation equal to each other.

This yields two relationships that are useful.