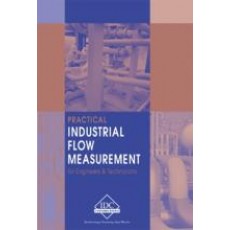 Industrial Flow Measurement This manual is suitable for the engineer, electrician, technician, craftsperson, operator and others who require practical, specialist knowledge for selecting and implementing flow measurement systems. This manual focuses on typical real-world applications. Close attention is given to special installation considerations and application limitations when selecting and installing different flow instruments.

When you have completed this chapter you should be able to:

Over the last fifty years, the importance of flow measurement has grown, not only because of its widespread use for accounting purposes, such as the custody transfer of fluid from supplier to consumer, but also because of its application in manufacturing processes.  Throughout this period, performance requirements have become more stringent — with unrelenting pressure for improved reliability, accuracy, linearity, repeatability and rangeability.

These pressures have been caused not only by major changes in manufacturing processes, but also because of several dramatic circumstantial changes, such as the increase in the cost of fuel and raw materials and the need to minimise pollution.  Industries involved in flow measurement and control include:

Fluid properties can vary enormously from industry to industry. The fluid may be toxic, flammable, abrasive, radio-active, explosive or corrosive; it may be single-phase (clean gas, water or oil) or multi-phase (e.g. slurries, wet steam, unrefined petroleum, or dust laden gases).  The pipe carrying the fluid may vary from less than 1 mm to many metres in diameter. The fluid temperature may vary from close to absolute zero to several hundred degrees centigrade, and the pressure may vary from high vacuum to many atmospheres.

Because of this  large variation in fluid properties and flow applications, many flowmeter techniques have been developed with each suited to a particular area.   However, of the numerous flow metering techniques that have been proposed in the past, only a few have found widespread application and no one single flowmeter can be used for all applications.

One of the most important primary properties of a fluid (liquid or gas) is its viscosity — its resistance to flow or to objects passing through it.

If the fluid is regarded as a collection of moving plates, one on top of the other, then the viscosity is a measure of the resistance offered by a layer between adjacent plates.

Figure 1.1 shows a thin layer of fluid sandwiched between two flat metal plates — the lower plate being stationary and the upper plate moving with velocity V. The fluid directly in contact with each plate is held to the surface by the adhesive force between the molecules of the fluid and those of the plate. Thus the upper surface of the fluid moves at the same speed V as the upper plate whilst the fluid in contact with the stationary plate remains stationary.  Since the stationary layer of fluid retards the flow of the layer just above it and this layer, in turn, retards the flow of the next layer, the velocity varies linearly from 0 to V, as shown.

Figure 1.1.  Explanation of viscosity with a thin layer of fluid sandwiched between two flat metal plates.

In this manner, the fluid flows under the action of a shear stress due to the motion of the upper plate.  It is also clear that the lower plate exerts an equal and opposite shear stress in order to satisfy a ‘no-slip’ condition at the lower stationary surface.  It follows, therefore, that the shear stress at any point in the flow, is directly proportional to the velocity gradient or ‘shear rate’.  Thus:

where:  K is the dynamic viscosity (m) measured in Pascal-Seconds (Pa.s).

In the cgs system, dynamic viscosity was formerly measured in poise,  centipoise or  (in the case of gases) micropoise where:

Surprisingly, pressure has less effect on the viscosity of gases than on liquids.

Kinematic viscosity was formerly measured in stokes or centistokes where:

Table 1. Comparison of the viscosities of  various fluids.

The majority of fluids used in engineering systems exhibit Newtonian behaviour in that, for a given value of pressure and temperature, the shear stress is directly proportional to the shear rate.  Thus, if the shear stress is plotted against shear rate the result is a straight line passing through the origin (Figure 1.2).

There are, however, certain fluids that do not exhibit this behaviour.  Examples include: tar, grease, printers’ ink, colloidal suspensions, hydrocarbon compounds having long-chain molecules, and polymer solutions.

The so-called ‘ideal plastic’ again exhibits a linear relationship between shear stress and shear rate.  However, such substances will only flow after a definite yield point has been exceeded (Figure 1.2).

When at rest, these materials possess sufficient rigidity to resist shear stresses smaller than the yield stress. Once exceeded, however, this rigidity is overcome and the material flows in much the same manner as a Newtonian fluid.

A pseudoplastic substance, such as printer’s ink, is characterised by certain polymers and hydrocarbons possessing long-chain molecules and suspensions of asymmetric particles.  Although exhibiting a zero yield stress, the relationship between shear stress and shear rate is non-linear and the viscosity decreases as the shear stress increases.

Dilatant materials also exhibit a non-linear relationship between shear stress and shear rate and a zero yield stress.  However, in this case, the viscosity increases as the shear stress increases.

This type of behaviour is found in highly concentrated suspensions of  solid particles.  At low rates of shear,  the liquid lubricates the relative motion of adjacent particles, thereby maintaining relatively low stress levels.  As the shear rate increases, the effectiveness of this lubrication is reduced and the shear stresses are consequently increased.

One of the most important fluid characteristics affecting flow measurement is the shape of the velocity profile in the direction of flow.

In a frictionless pipe in which there is no retardation at the pipe walls, a flat ‘ideal’ velocity profile would result (Figure 1.3) in which all the fluid particles move at the same velocity.

However, we have already seen that real fluids do not ‘slip’ at a solid boundary but are held to the surface by the adhesive force between the fluid molecules and those of the pipe.  Consequently, at the fluid/pipe boundary, there is no relative motion between the fluid and the solid.

At low flow rates the fluid particles will move in straight lines in a laminar manner — with each fluid layer flowing smoothly past adjacent layers with no mixing between the fluid particles in the various layers.  As a result the flow velocity increases from zero, at the pipe walls, to a maximum value at the centre of the pipe and a velocity gradient exists across the pipe.

For a given pipe and liquid, as the flow rate increases, the paths of the individual particles of fluid are no longer straight but intertwine and cross each other in a disorderly manner so that thorough mixing of the fluid takes place.  This is termed turbulent flow.

As shown in Figure 1.5, the velocity profile for turbulent flow is flatter than for laminar flow and thus closer approximates to the ‘ideal’ or ‘one dimensional’ flow.

Turbulent flow should not be confused with swirl or disturbed flow that can cause an asymmetric flow profile (Figure 1.6).   Obstructions in the pipe, such as elbows, steps, control valves, and T-pieces, can produce vortices or swirls in the fluid flow that can severely affect measurement accuracy.  Indeed, such disturbances can have an important bearing on accuracy for as much as 40 pipe diameters ahead of the measuring device.

The effects of swirls can be minimised by the use of a flow conditioner, or straightener in the upstream line.

The onset of turbulence is often abrupt and in order to be able to predict the type of flow present in a pipe, for any application, use is made of the Reynolds number, Re — a dimensionless number given by:

Osborne Reynolds (1842-1912) showed that irrespective of the pipe diameter, type of fluid, or velocity, then the flow is:

From the foregoing it is seen that, in addition to viscosity, Re is also dependent on density.

Since most liquids are pretty well incompressible, the density varies only slightly with temperature.  However, for gases, the density is strongly dependent on the temperature and pressure in which (for ideal gas):

Most gases may be considered  ideal at room temperatures and low pressures.

Both laminar and turbulent flow profiles require time and space to develop.  At an entrance to a pipe, the profile may be very flat — even at low Re.  And it may stay laminar, for a short time, even at high Re.

In flow measurement a number of parameters can be used to describe the rate at which a fluid is flowing:

The term velocity is often used very loosely to describe the speed at which the fluid passes a point along the pipe.  In reality, most modern flowmeters measure either the point velocity or the mean velocity.

The point velocity is the flow velocity in a localised region or point, in the fluid and is, generally of little use in practice.  It is used mainly in research to determine, for example, velocity profiles or flow patterns.

The mean flow velocity,    , can be obtained by measuring  the volumetric flowrate, Q, and dividing it by the cross-sectional area of the pipe, A:

An example of the calculation of the mean velocity of the flow conduit by area-weighting point-velocity measurements is illustrated in Figure 1.7, in which a number of velocity bands are scaled across the cross-sectional area of a 320 mm diameter conduit.

Figure 1.7. Example of area weighted technique for determining the mean velocity of a fluid.

The mean velocity can be determined using standard averaging techniques in which the velocities of each band are summed and then divided by the number of bands:

In the area-weighted technique, the scaled areas, velocities and the products of each area, times its local velocity, are tabulated for each velocity band (Table 5).  The area-weighted mean velocity is calculated by summing the velocity-area products, and dividing the sum of the cross-sectional area of the flow conduit.

The error thus obtained using the standard averaging technique is:

Most chemical reactions are largely based on their mass relationship and, consequently, in order to control the process more accurately, it is often desirable to measure the mass flow of the product.   The mass flow rate, W, gives the total mass of fluid flowing at any instant in time.  A knowledge of volume flow rate, Q and the fluid density, r, determines the mass flow rate from:

Some flowmeters, such as Coriolis meters, measure the mass flow directly.  However, in many cases, mass flow is determined by measuring the volumetric flow and the density and then calculating the mass flow as shown above.  Sometimes the density is inferred from the measurement of the pressure and temperature of the fluid.  This type of measurement is referred to as the inferred method of measuring mass flow.

For multi-phase flows, the mass or volume flow rate of one of the constituents is often of interest.  For example, in the case of a slurry, the mass flow rate of the solid phase is usually the required variable.