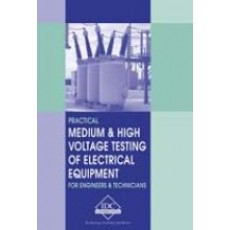 Testing is an essential activity in any engineer's career. Whatever your role in industry (electrical designer, purchase engineer, manufacturer, installation contractor or maintenance engineer) a solid knowledge of tests to be carried out on a given piece of electrical equipment and interpretation of results obtained is a necessity.

This manual is designed to familiarise you with various aspects of testing general electrical equipment and high voltage testing in particular. Examples are cited from various international standards regarding the procedure for conducting of tests and interpreting the test results. The need for keeping proper records of tests conducted both in the initial stages and later during routine maintenance is discussed. Some of the tests are too complex to be performed on a routine basis or may require specialised equipment which may not be normally available to user industries or even manufacturers. This is where the services of an independent and accredited test lab is useful. The role of such labs is briefly discussed.

The electrical distribution network has become the main nerve center of economic activities today. When electricity was invented a couple of centuries back, no one could have imagined the quantum of electricity being generated in the world today; it runs to millions of mega watts. This had been possible by the simultaneous invention of many electrical equipment which are used to distribute the generated power to many remote corners of the world.

The following is a very simple network of an electrical system comprising of many electrical equipment, shown in single line diagram.

The above diagram includes transformers which are mainly used to transform the voltage from one value to another. Hence it is obvious that any electrical system intended to serve many consumers, whether in a plant or a township or a country, primarily consists of equipment whose voltage ratings will differ from one zone to another. This is mainly because of the use of transformers, which are the backbones of efficient electrical distribution at minimum losses.

The operating voltages are broadly divided to three main categories:

Low voltage distribution is the most common one ranging from the simple lighting switch where you are reading this manual to small switch boards and motor control centers. LV equipment are mainly limited for controlling small power loads whose ratings may range from fractional to a few hundreds of HP.

The equipment considered in this manual mostly cover those falling in the EHV, HV and MV category with a brief description covering LV equipment as well. It shall be remembered that most of the tests which verify the condition of equipment insulation do need test voltages exceeding 1 kV but at the same time the testing and measurements invariably derive these high voltages using low voltage equipment.

HV equipment is extensively used in the following areas.

The use of MV equipment is mainly applicable in the following areas.

The common HV and MV equipment used in the electrical system are generally the following:

The continuity of power distribution depends on the reliability of the electrical equipment in a system. While the reliability of many equipment have increased manifold during the last century, it is not recommended to connect any finished equipment to a system directly from the manufacturing place, unless its performance is proven. Earlier manufacturers had to think of many ways to prove the worthiness and reliability of their equipment. Nevertheless due to various reasons, manufacturers duplicating proven equipment also gained entry into the market. This had led to claims and counterclaims by the sellers, with consumers and end users being confused.

However the concepts have changed and bringing equipment under a common umbrella to prove their performance have slowly become the practice in every country. Each country had established committees and organizations to ensure the uniformity and performance of electrical equipment in an orderly way. This has led to the release of electrical standards in each country (for all electrical equipment). The major content of most of these cover the minimum tests that are to be conducted on any equipment in an environment that may be more severe than normal operating conditions; in terms of voltage and current levels.

It can be concluded that testing on electrical equipment is needed

Most electrical equipments are produced by assembling various components made of different materials. The internal construction of the final equipment like transformers, circuit breakers, etc are not visible from the outside and it is not possible to visually check the performance of each and every part under a particular operating condition. Hence it is necessary to find ways to check the performance of the equipment in its full form without dismantling it. Accordingly ways and means have been drawn out to check the performance of the complete equipment in its final form which has become the basis of all electrical equipment standards. The testing helps in identifying the defects that may be inherent in particular equipment. Hence it enables the user to take a decision whether to use or not to use the equipment under known circumstances.

The purpose of electrical testing on major equipment is basically to ensure that the equipment will function as desired, when it is installed and energized within its specified voltage and load conditions. This is basically like an insurance premium to be spent before the equipment is accepted in a particular installation. The other purpose is to develop a set of base line test results of the equipment that can be compared in future to identify deterioration and therefore for taking corrective actions.

Depending on the area/nature of the tests, they may be categorized as

The factory tests are the major tests that are to be conducted by the manufacturer before declaring that the equipment suits a particular application.

These are categorized as:

It is not practically possible to test the electrical equipment in ambient conditions at which they are expected to be in service. The major conditions that can affect performance and its acceptance by the end user are

Hence it is customary to define the performance requirements at pre-defined altitude and temperature and also to correct the test results to some basic temperature conditions; so that the equipment performance can be evaluated in a true sense.

The major requirement for any electrical equipment is that it shall be able to withstand some minimum voltage across its terminals and also across each terminal to earth, since the equipment is expected to carry its rated voltage throughout its life. Hence almost all HV and MV equipment shall be tested to prove its capacity to withstand voltage conditions. These are generally called Dielectric tests. Most electrical equipment has its terminals separated by air. This means that air is the insulating medium, though internally their parts may be filled with some other insulating medium like oil. It is well known that the breakdown voltages across two terminals separated by air vary with the ambient temperature due to the presence of moisture at higher altitude conditions. Hence it is usual to define test voltages at some minimum altitude conditions. The standards normally consider an altitude of 1000 meters above sea level, to define the test voltages to be withstood by equipment. Correction factors shall be applied for altitudes above this value, which means the equipment, shall be able to withstand higher operating voltages at higher altitudes.

The other major condition on which test results are dependant is the applicable tolerance level. It is necessary that there cannot be any tolerance on the test voltages after applying the above correction factors. This means that any equipment failing at 99.9 kV with its defined test voltage of 100 kV can not be considered to have passed this test. At the same time the losses and impedance values which are normally measured during tests, cannot meet the guaranteed figures exactly. Hence it is usual to define tolerances on test result values for such guaranteed figures and the equipment is accepted to meet the testing requirements if the results fall within the defined tolerance value.

The following sections also include the conditions and tolerances that are normally applicable for various HV/MV equipment test values and their respective results.