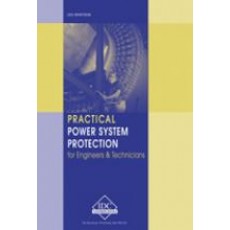 This manual will give plant operators, electricians, field technicians and engineers a better appreciation of the role played by power system protection systems. An understanding of power systems along with correct management will increase your plant efficiency and performance as well as increasing safety for all concerned.

The manual is designed to provide excellent understanding on both a theoretical and practical level. Starting at a basic level and then moving onto more detailed applications, it features an introduction covering the need for protection, fault types and their effects, simple calculations of short circuit currents and system earthing.

A power system must be not only capable of meeting the present load but also requires the flexibility to meet the future demand. A power system is designed to generate electric power in sufficient quantity, to meet the present and estimated future demands of the users in a particular area, to transmit it to the areas where it will be used and then distribute it within that area, on a continuous basis.

To ensure the maximum return on the significant investment in the equipment, which goes to make up the power system, and to keep the users satisfied with reliable service, the whole system must be kept in operation continuously without major breakdowns.

This can be achieved in two ways:

A protective relay is the device, which gives instruction to disconnect a faulty part of the system. This action ensures that the remaining system is still fed with power, and protects the system from further damage due to the fault.

Hence, use of protective apparatus is very necessary in the electrical systems, which are expected to generate, transmit and distribute power with least interruptions and restoration time.

These requirements are necessary, firstly for early detection and localization of faults and secondly, prompt removal of faulty equipment from service.

In order to carry out the above duties, protection must have the following qualities:

To meet all of the above requirements, protection must be reliable which means it must be:

The protection of any distribution system is a function of many elements and this section gives a brief outline of the various components that go into protecting a system. The following are the main components of a protection system.

The above items are extensively used in any protective system and their design requires careful study and selection for proper operation.