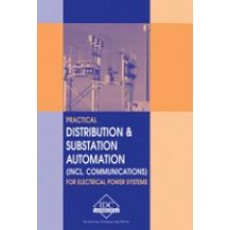 The characteristics and operation of the Intelligent Electronic Devices (IEDs) are also examined and a practical checklist is provided for the optimum way to implement this technology to your next project.

Power system automation can be defined as a system for managing, controlling, and protecting an electrical power system. This is accomplished by obtaining real-time information from the system, having powerful local and remote control applications and advanced electrical protection. The core ingredients of a power system automation system are local intelligence, data communications and supervisory control, and monitoring.

(Note: Power system automation is also referred to as substation automation. The term ‘substation’ will be used throughout the text to describe mainly a building housing electrical switchgear, but it may also include switchgear housed in some sort of enclosure, for example a stand-alone ring main unit, etc.)

Power system automation may be best described by referring to Figure 1.1.

Electrical protection is still one of the most important components of any electrical switchgear panel, in order to protect the equipment and personnel, and to limit damage in case of an electrical fault.

Control includes local and remote control. Local control consists of actions the control device can logically take by itself, for example bay interlocking, switching sequences, and synchronizing check. Human intervention is limited and the risk of human error is greatly reduced.

Local control should also continue to function even without the support of the rest of the power system automation system.

Remote control functions to control substations remotely from the SCADA (supervisory control and data acquisition) master(s). Commands can be given directly to the remote-controlled devices, for example open or close a circuit breaker. Relay settings can be changed via the system, and requests for certain information can be initiated form the SCADA station(s). This eliminates the need for personnel to go to the substation to perform switching operations, and switching actions can be performed much faster, which is a tremendous advantage in emergency situations.

A safer working environment is created for personnel, and huge production losses may be prevented. In addition, the operator or engineer at the SCADA terminal has a holistic overview of what is happening in the power network, improving the quality of decision-making.

A wealth of real-time information about a substation or switchgear panel is collected, which are typically displayed in a central control room and/or stored in a central database. Measurement consists of:

This makes it unnecessary for personnel to go to a substation to collect information, again creating a safer work environment and cutting down on personnel workloads. The huge amount of real-time information collected can assist tremendously in doing network studies like load flow analyses, planning ahead and preventing major disturbances in the power network, causing huge production losses.

Note: The term ‘measurement’ is used in the electrical environment to refer to voltage, current and frequency, while ‘metering’ is used to refer to power, reactive power, and energy (kWh). The different terms originated because several different instruments were historically used for measurement and metering. Now the two functions are integrated in modern devices, with no real distinction between them; hence the terms ‘measurement’ and ‘metering’ are used interchangeably in the text. Accurate metering for billing purposes is still performed by dedicated instruments.

The object division of the power system automation system consists of intelligent electronic devices (IEDs), modern, third-generation microprocessor based relays and/or remote terminal units (RTUs). (PLCs also continue to play an important role in some systems). They receive analogue inputs from the current transformers (CTs), voltage transformers (VTs) and transducers in the various switchgear panels, as well as digital inputs from auxiliary contacts, other field devices or IEDs, or the SCADA master. They can perform complex logical and mathematical calculations and provide an output either to the SCADA master, other field instruments or IEDs, or back to the switchgear to perform some command, for example open a circuit breaker.

The object division consists of the process level (field information from CTs, VTs, etc) and the bay level (local intelligence in the form of IEDs, RTUs, etc). This is discussed further in Chapters 5 and 7.

The communications network (comms network for short) is virtually the nervous system of power system automation. The comms network ensures that raw data, processed information, and commands are relayed quickly, effectively and error-free among the various field instruments, IEDs and the SCADA system. The physical medium will predominantly be fiber-optic cables in modern networks, although some copper wiring will still exist between the various devices inside a substation.

The comms network need to be an ‘intelligent’ subsystem in its own right to perform the functions required of it, and is not merely a network of fiber-optic and copper wiring. Communications are discussed in more detail in Chapters 8, 10 and 11

The communication network serves as the interface between the bay level and the SCADA station level, which might be a SCADA master station in the substation itself, or remotely in a central control room.

The SCADA (supervisory control and data acquisition) master station(s) forms the virtual brain of the power system automation system. The SCADA master receives data and information from the field, decides what to do with it, stores it (directly or after some form of processing), and issues requests and/or commands to the remote devices. Therefore, the SCADA master is effectively in control of the complete power system automation system.

Now, a SCADA master consists simply of an advanced, reliable PC or workstation (with its peripheral and support hardware) and a SCADA software. (In contrast with a few years ago when SCADA systems used to run on big main-frame computers or some form of complex proprietary hardware).

From the preliminary discussion in this chapter one can conclude that the principles of power system automation is not similar to process automation applied to a substation, but is in fact a totally different concept.

An overview of electrical power networks and the fundamental principles of electrical protection is necessary to fully appreciate the multitude of benefits a power system automation system can bring to the network, and to put it into perspective regarding electrical power transmission and distribution. These are the subjects of Chapters 3 and 4, respectively.

Chapter 5 gives an introduction to substation automation functions and describes the different devices used to gain remote access to substations through a SCADA system, namely RTUs, PLCs, and IEDs.

Chapter 7 covers the modern trends in current and voltage measurement.

Chapter 12 is devoted to the IEC 61850 protocol specifically developed for data communications in substations and power automation networks.

Chapter 13 discusses some of the security issues associated with the substation automation environment.

Examples of some leading manufacturers’ power system automation products are discussed in Chapter 14.

Appendix A is a White Paper discussing Practical Substation Design Considerations and Appendix B discusses Standard Alarm arrangements for substations.