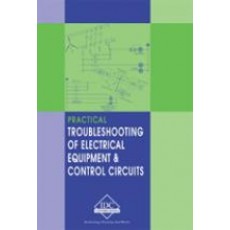 This manual focuses on the main issues of troubleshooting electrical equipment and control circuits of today to enable you to walk onto your plant or facility to troubleshoot and fix problems as quickly as possible.

Building electrical equipment or networks so as to completely eliminate the possibility of failure in service is neither a practical, nor a viable proposition. It is therefore a fact of life, that different types of problems do occur in electrical equipment and systems, however infrequently and at random locations.

However, it is imperative that the problems should be identified, diagnosed and solved as quickly as possible to avoid causing disturbance to the users, mitigate damage to equipment and prevent safety hazards. For example, problems involving electrical faults produce short circuit currents which release enormous amount of destructive heat energy capable of causing irreparable damage to insulators, conductors and equipment and produce violent magnetic forces that can twist and destroy conductors and bus-bars in the panels. Electrical faults in a hazardous area like a refinery can even cause explosions.

It is of major importance to prevent or mitigate problems in electrical systems because the cost of damage to life and property inflicted by major problems can be very huge and prohibitive. The cost of electrical failures is attributable to the following:

Problems can arise on account of various reasons such as:

Equipment used in electrical circuits can be broadly divided into power equipment and control equipment.

Power and power electronic equipment are used for handling the main electrical energy in electrical circuits. They are designed to carry relatively larger magnitudes of power.

Control equipment, as the name implies are used only for controlling the power handled by the main power circuits and equipment and hence are designed relatively to handle lesser power than what is handled by power equipment and circuits.

Power circuits are required for carrying power to, or from large electrical equipment like motors, alternators or an electrical installation. They are used for performing the following functions:

Power circuits carry large magnitude of power and therefore consist of heavy conductors along with switching devices like contactors, breakers for switching the power on and off. Protection devices are also included in power circuits for resolving overload conditions or other faults. Figure 1.1 shows the typical power circuit of a DOL starter used for a 3-phase induction motor.

Power circuit for a motor

Electrical problems can be basically categorised as following:

An ‘Active fault’ is one, where the fault current flows from one phase conductor to another (phase-to-phase) or alternatively from one or more phase conductors to earth (phase-to-earth). An active fault can be a ‘solid fault’ or an ‘incipient fault’. A solid fault occurs due to sudden and complete breakdown of insulation resulting in high fault currents and release of huge amounts of destructive energy. A solid fault must be cleared as quickly as possible due to the catastrophic damage it can cause to equipment. An ‘incipient’ fault is a fault that starts with a small magnitude and develops over an extended period of time, till the deterioration results in the occurrence of a ‘solid’ fault.

Passive faults on the other hand are not really faults but are rather conditions that stress the system beyond its design capacity and which may ultimately lead to occurrence of active faults. Typical examples for passive faults are:

While passive faults are not as severe as active faults in the short run, it is necessary to identify and clear these faults to prevent them developing into larger faults.