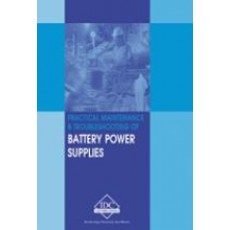 A battery converts chemical energy into electric energy through an electro-chemical process. The basic unit is called a "cell" and can be manufactured in a wide variety of shapes and sizes. Batteries are made up of one or more cells in series or parallel combinations to create the desired voltage and output capacity.

The electro-chemical cells consists of two terminal suspended in an electrolyte. The terminals are called the anode (-) and the cathode (+). An electrical current is essentially a flow of electrons, and the battery can be regarded as an electron pump. The chemical reaction between the anode and the electrolyte forces electrons out of the electrolyte and into the anode metal, through the circuit, then back to the cathode. From the cathode metal, the electrons re-enter the electrolyte. This direction may seem strange, from negative to positive. We regard ‘current’ as flowing from positive down to negative, but in fact, this current is a flow of electrons in the opposite direction! The anode and cathode both get converted during this reaction – one being ‘eaten away’, and the other has a build-up of material on it. When a rechargeable battery is recharged, this chemical reaction is reversed, and the terminals are restored.

Batteries can be divided into two classes: primary, and secondary. Primary batteries are designed for a single discharge cycle only, i.e. they’re non-rechargeable. Secondary cells are designed to be recharged, typically, from 200 to 1000 times. Among secondary cells, the options open to us include NiCd, NiMH, rechargeable Lithium, or lead-acid.

The energy stored in a battery is measured in the units Ampere-hours (Ah). The units of energy are actually Volts x Amps x Seconds, but since the voltage of the cell is constant, it is only the product of current and time which determines the amount of energy in the battery.

Rechargeable cells generally have a lower energy density (that is the total amount of energy they can hold, Volts x current x time, divided by the physical size of the cell) than primary cells. A nicad D cell provides 5Ah at 1.2V, a lead acid D cell provides 2.5Ah at 2V, and the comparable alkaline cell provides 10Ah at 1.5V.

The table below shows a comparison between the main three types of rechargeable battery.

In lead-acid batteries, the positive electrode is lead dioxide, while the negative electrode is metallic lead. The electrolyte is a sulphuric acid. As the cell discharges, the acid electrolyte is consumed producing water and both electrodes change into lead sulphate. When the cell is recharged, the chemical reaction reverses. As in most battery types, it is good to store them at cool temperatures and operate them at warm temperatures. Most lead-acid batteries have the highest energy density at about 30-40ºC. If the cell undergoes overcharging, hydrogen and oxygen gassing will occur with the loss of water.

The sealed type of lead-acid battery (SLA battery) is similar to the non-sealed type except a few changes in the electrolyte. This commonly takes the form of a gel or is absorbed by the separator. Methods to recombine oxygen formed at overcharging are employed. Although specifically designed for the reduction of excess gassing, pressure valves usually are installed to vent excess pressures to the atmosphere. The sealed construction allows a maintenance-free life which is not restricted to a horizontal orientation.

Non-sealed lead-acid batteries contain a liquid sulphuric acid electrolyte. If the battery casing is split, the acid can leak out. In batteries is it quite concentrated and will easily burn the skin and clothing.

All lead-acid batteries produce hydrogen and oxygen during the recharging process. This production is increased if overcharging occurs. Sealed designs cause recombination of the oxygen at the same rate is produced, therefore eliminating the explosive mixture. Hydrogen which is produced will permeate plastic containers and as long as the sealed battery is not in a sealed small area, the hydrogen will harmlessly dissipate into the atmosphere. It is always good practice to allow for ventilation even with sealed batteries because of the possibility of a charger failure causing abnormal charge rates. If this happens, the battery will vent to prevent pressure build up. Another precaution is to prevent short circuits of the battery terminals. This can cause high heat and potential fire hazard.

A common way to specify the charge and discharge current of a battery is the C rate. It denotes the rate of total battery capacity. It is calculated by dividing the charge or discharge current by the total numerical battery capacity (Ampere-hours, Ah). For example a 30Ah battery is discharged with a current of 6A. The C rate is equal to 6A / 30Ahr=0.2C rate, also expressed fractionally as a C/5 rate, or C5.

7.2. Effect of current on Ah rating

Although a battery is quoted as having a capacity of, say, 26 Ampere-hours, this is generally its best possible capacity. The actual capacity depends upon a number of factors, including operating temperature, discharge current, and battery age. The Ampere-hour rating is normally for a discharge current of C/10 (2.6 Amps for a 26Ah battery). To see how this changes when the discharge current is different, look at the graph below:

Taking the 26Ah line and plotting the percentage of nominal capacity against the current drawn, we have the following graph:

Thus when we come to work out how large a battery we need, we are going to have to work out an approximate load-profile.

7.3. Effect of temperature on Ah rating

Not only does load current reduce the rating, the temperature does also. Batteries are normally quoted for capacity at 25ºC. Below this temperature, and also far above it, they will operate less efficiently, The graph below shows how temperature affects the Hawker Genesis range of lead-acid batteries.

Also, the effective capacity of the battery improves as the temperature increases:

In an ideal battery, the terminal voltage would be constant over the whole discharge time, until when the battery is finally fully discharged, the voltage would drop right down (although this could make battery level detection quite hard). However, in real batteries, the terminal voltage decreases as the charge reduces. The flatter this drop the better. Let’s look at some typical discharge curves of various battery technologies:

It can be seen that lead-acid batteries have a reasonably flat discharge curve until they are nearly exhausted, although they are nowhere near as good as the NiCd secondary, and silver, and mercury primary cells.

Since the voltage does gradually decrease as the battery is discharged, an approximate determination of the state of discharge van be made by measuring the open-circuit voltage to within a tolerance of about 15%:

There are a variety of parameters which must be kept within certain thresholds to maintain the life of your battery. The most important is the depth of discharge (DOD). At a DOD of 80%, the Hawker Genesis battery will deliver about 500 cycles; at 100% DOD, that number decreases to about 400 cycles.

An increase in the charge current can be accomplished only if the charge voltage is also increased. This, in turn, leads to a higher level of overcharge, which speeds up the battery’s ageing process.

Any battery, primary or secondary, loses charge over time when it is kept on open circuit. This phenomenon is termed self-discharge. If the capacity loss due to self discharge is not compensated by recharging in a timely fashion, the battery capacity may become irrecoverable due to irreversible sulphation, where the active materials (PbO2 , lead dioxide, at the positive plates and sponge lead at the negative plates) are gradually converted into an electroinactive from of lead sulphate, PbSO4 .

Therefore, if the capacity loss associated with self-discharge is not replenished, the battery ultimately fails because storage is equivalent to a very low rate of discharge. The key factor influencing the self-discharge rate is the storage temperature. This is because the ambient temperature plays a major role in determining the speed at which the internal chemical reaction proceeds. The higher the temperature, the faster the speed of chemical reactions.

There are many methods of recharging a lead-acid battery. Cheap car battery chargers (often termed ‘taper chargers’ because of the shape of the current waveform) generally have a transformer to reduce the mains voltage to around 12V rms, then rectify this to produce a very dirty DC signal. In a normal DC power supply using this scheme, the output is capacitively smoothed, and often regulated. However, the battery itself provides the smoothing in this scheme, and regulation is unnecessary. The battery is then charged with a constant voltage, although it has a large AC content (ripple) on top of it. This ripple is a contributing factor to the shortening of the battery’s life, and ideally should be removed. Charging is covered in chapter 2.

Batteries may be connected in series to generate higher voltages. The total voltage is the sum of all the individual voltages. However, some care must be taken depending on exactly what load is attached to each battery. Take the following connections:

In connection A, two batteries are connected in series to supply a single load. The batteries should be of the same type and capacity, and should be at the same state of charge, i.e. when you connect them up, make sure both are charged up.

In connection B, it doesn’t mattery if the two batteries are of different type. The upper 12v battery may be just a small one to supply high voltages to turn MOSFETs in the upper arms of an H-bridge for example. The low one will be the high power battery.

If you connect batteries in parallel you must be very careful that they are exactly the same type, same state of charge, and the same age, much more so than in the serial connection above. Batteries have an internal resistance, which goes up as they discharge. Imagine the following connection where one battery is fully charged and the other is discharged:

This current is very high and may damage some batteries.

If the batteries are at an identical state of charge, their terminal voltages will be the same, and so no appreciable current will flow when they are connected in parallel. Any imparity will be evened up as the one with greater charge and hence terminal voltage charges up the other.

It may be easier in the long run if you want to use two batteries with two motors to connect them separately. The negative terminals can be connected together, but the positives should then go to the positive connector of two separate speed controllers.

Batteries can be connected up in series-parallel configurations to get the required voltage and current capability, although it is recommended that no more than 4 in series should then be connected to a second chain of four:

When batteries are connected in parallel, they will not share current exactly. If one supplies a slightly higher current, then it will get warmer. As it gets warmer, it will become more efficient, and it will start to supply even more of the current. Hence there is the possibility that it will end up supplying most of the current while the other sits there getting charged up! A solution to this is to insert small value resistors in series with each battery before paralleling them up.

All batteries are quoted for a maximum current source. Sometimes there is a continuous rating, and a pulse rating. The pulse times are often very short, so are not much use. The continuous rating is also normally quoted at 25C, and may have to be derated at higher temperatures. Remember, this current is the maximum that the wires, plates, and terminals in the battery can take before getting too hot. If the battery is already hot, then the power they can take will be less because of that.